Lucy Li decided to switch to professional play after years of making the international community admired by her appearance in the top arena.

Li was not immediately included in the latest WAGR ranking results and was included in the category “professionally promoted”. Li’s highest amateur position is third in the world, the nearest is 5th. 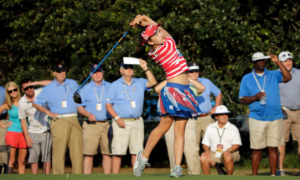 Last month, Li competed in the second stage of the professional promotion series. She finished in the T72 position and competed in the Symetra Tour second division system. “It was exciting to take the next step in the golf career, on and off the field,” Li wrote on Twitter.

In the case of a better performance to be present and pass the final stage called LPGA Qualifying Series, Li also can not go to the top arena because LPGA Tour requires the player to be at least 18 years old.

Although not yet in a new position, Li has calculated “long distance story”. This young talent intends to use the income from her prize money in the future to create an organization to support and develop young golf.

At the age of 11, Li surprised the golf world by having a ticket to the main Women’s US Open 2014 main round and became the youngest golfer in the history of the tournament. Here, Li experienced 36 holes with the same 78 sticks in the scoreboard and was cut. After his fame at the age of 11, Li won the title of excellent amateur Golfer at the major ANA Inspiration 2017. The following year, Li returned to Women’s’s US Open and finished in T55.

In February 2019, Li was in big trouble appearing in Apple’s smartwatch ad campaign. This is in violation of USGA regulations for amateur golfers. However, one of the two golf management and development agencies in the world (besides Royal & Ancient) loosened upon warning and did not destroy Li’s amateur status.