On Monday night the 53-year-old coach was in charge of the team in the 6-0 defeat to England in Sofia. He then was marred by home supporters from racist chanting and Nazi salutes. 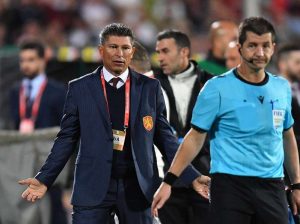 Balakov claimed that during the match he didn’t hear any of the racist abuse pointed at English black players.

On Friday afternoon The Bulgarian Football Union executive committee organized a press conference and it was reported that Balakov had tendered their resignations along with the entire committee.

Balakov said that he was just concentrated on the game. He talked to the English press downstairs although he didn’t actually hear anything. He told them that if this is proven to be true, they have to apologise for it and they have to be ashamed. But it has to be proven exactly to be true.

He later made a statement issuing a “sincere apology” to the England team and anyone else who offended by the racist abuse.

Over the events of Monday night, five more men have been arrested. These five men were searched at a different precinct in the Bulgarian capital and were detained at the First District police station in Sofia, taking the total number identified to 16. Of which four already having been fined 1,000 lev (around £440) and banned from attending any sporting event for the next two years. On Friday one individual could be remanded in custody and faced a pre-trial hearing.

Just before the half-hour mark UEFA’s anti-racism protocol step one was activated and continued throughout the remainder of the match, while the referee asking for a public address announcement ordering the abuse to stop to be made.

Just before half-time although there was a short stoppage, the abuse continued and the game was completed with England’s 6-0 victory. The referee asking for a public address announcement in the stadium to stop ordering the racist behaviour.