The 6-3 7-5 win of Roger Federer and Alexander Zverev on September 20 helps the European team to take advantage after the first day of the Laver Cup 2019.
World number five player Dominic Thiem saved three match-points before beating Denis Shapovalov 6-4 5-7 13-11 in the opening match. In the next men’s singles match, Fabio Fognini lost 1-6, 6-7, 3-7 at the hands of Jack Sock.
Thanks to Stefanos Tsitsipas’s 6-2, 1-6, 10-7 victory over Taylor Fritz in the men’s singles match after which the European team took a 2-1 lead against the World team.
The results of the first match day were determined by a 6-3 7-5 victory of Roger Federer – Alexander Zverev before Denis Shapovalov – Jack Sock. 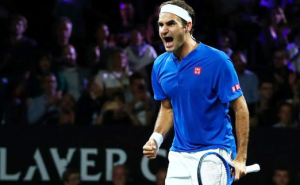 Federer – Zverev soon had the advantage of winning the game to take the ball to a 3-1 lead and quickly closed the first set of wins with a second serve win rate of 69%. The match in set two took place more balance. After many missed opportunities, Shapovalov finally won the game delivered at the tenth break-point with a dangerous backhand to equalize 4-4.
In the next match of the opponent, the World team has six chances to have a set-point but not take advantage of success. Shapovalov’s double error at 5-5 drew a big advantage for Federer – Zverev. The European pair did not miss that opportunity, before closing the match after 97 minutes – a record for the longest men’s doubles match in Laver Cup history.
Making up to 16 break-points, but only succeeding once, Shapovalov – Sock peeked at the European team being 1-3 loss after the first day of the Laver Cup 2019.
“All the players have been traveling around the world for 10-11 months. There’s nothing like playing at home. Tonight is a special night for me,” Federer said after the game.
In the second day of the Laver Cup 2019 in Geneva, on September 21, the Swiss player will face Nick Kyrgios, Alexander Zverev face John Isner, and Rafael Nadal will play two matches, in turn against Milos Raonic. and then teamed up with Stefanos Tsitsipas in the men’s doubles match against Nick Kyrgios – Jack Sock.