Inter Milan contacted several European clubs to offer to cut wages due to the Covid-19 influence.

Inter suggested Barca support the proposal to reduce player salaries when the Association of European Clubs meeting on 23/3.

Serie A clubs are expected to lose at least $ 860 million if the season is canceled. Many teams have used up all the money expected to receive from TV rights for recruiting, paying salaries as well as promotional activities.

On March 21, representatives of the Serie A teams met to discuss the delay in paying players in March. According to the Italian press, the players are likely to be reduced by 30% of their monthly salary, until the season. come back. Italian Football Association President Damiano Tommasi said that players are the first to care about the system balance but the parties need to sit down to negotiate.

Inter chief executive Beppe Marotta has contacted many European clubs, including Real Madrid and Barca, to offer to reduce the player’s wages, according to Il Giornale.

Barca is said to support the proposal of Inter. The management of the Spanish club estimated a big loss when the season was postponed and also introduced a solution to reduce the salaries of all employees, including the players – which account for 61% of operating costs. Barca player is said to not object to this proposal.

On March 23, when the Association of European Clubs meets, this issue will be discussed. Meanwhile, Barca will take sides of Inter, calling on the clubs to negotiate to reduce player salaries. 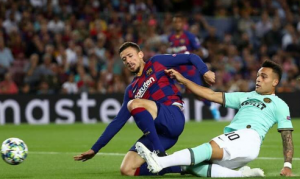 Alex Song belongs to the group of nine players who were sacked by FC Sion for not agreeing to reduce wages, sharing difficulties with the club during the pandemic.

Of these nine players, two have ever played for Arsenal including midfielder Alex Song and center-back Johan Djourou. The others are Christian Zock, Pajtim Kasami, Ermir Lenjani, Xavier Kouassi, Birama Ndoye, Mikael Facchinetti and Seydou Doumbia.

FC Sion President Christian Constantin has texted each player in the team, offering to pay about $ 12,200 in idle allowances for each person, instead of paying wages. The move is intended to save the tragic financial situation of the club in the context of the tournament being suspended due to disease.

Players are required to respond by noon March 18. Otherwise, they will be released contract. Many players refused or did not respond, and nine were dismissed. The majority of the nine will be out of contract next June.