No longer so crazy and wasting physical strength as shown before Iaquinta, Barboza or McGregor, Khabib Nurmagomedov at UFC 242 is a much calmer monster. 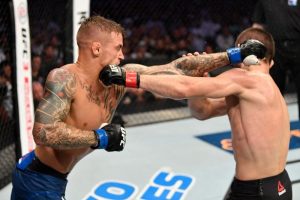 Back after a $ 500,000 penalty and a nine-month ban, Nurmagomedov entered the title defense match against Dustin Poirier. Around the time Khabib left the ring, Poirier won the interim championship title by winning against UFC Featherweight champion Max Holloway.

If in the previous matches, Khabib Nurmagomedov always showed himself as a model of “excavator” with infinite fuel tank, currently, Khabib’s strategy of using physical strength is much more flexible.

Khabib Nurmagomedov performed a new style, more calm but also “deadly”. It can be said that, in the third half, Khabib played at the back of Dustin. Poirier until the end of the match with RNC.

For Dustin Poirer, despite being overwhelmed for most of the match, he still had a great timing that nearly brought Khabib into Guilotine’s stranglehold. Unfortunately, at that time, Dustin Poirer exhausted his physical condition to be able to successfully implement the locking phase. And that is not enough to do miracles.

With the 28th win, Khabib’s next opponent is likely to be Tony Ferguson. He said that he will be ready for anything and any opponent. But he wanted to have a few days off. Meanwhile, UFC President Dana White still wants to lead Khabib to a rematch with Conor, simply because, it will be UFC’s “Golden Battle”, after the accumulated resentment between the two sides, according to Khabib, has not been resolved in the end. President White believed that if that match were not successful, then Khabib’s next opponent would be McGregor.