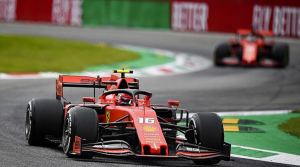 Leclerc’s performance was made at the start of the third classification round (Q3), with soft tires. He is faster than two Mercedes drivers – Lewis Hamilton and Valtteri Bottas – respectively 0.039 seconds and 0.047 seconds. Sebastian Vettel is fourth (P4) with 0.150 seconds slower than his teammate Leclerc.

The surprise came from two Renault drivers – Daniel Ricciardo and Nico Hulkenberg – with P5 and P6. Both are less than a second Leclerc. Max Verstappen (Red Bull) had problems with the new engine and couldn’t pass Q1. Young Dutch talent will have to start at the end because he gets punished for using the engine in the season. Verstappen’s teammate – Alexander Albon – was unlucky to fail to make a result, after Q3 was halted by the accident of Kimi Raikkonen (Alfa Romeo) on Turn 11. Sharing the same situation with Albon was Lance Stroll (Racing Point) – first time driver in Q3 this season.

Drama is pushed up when the green light is on again when the time is six minutes. But the riders don’t want to start first when all want to take advantage of the wind. The FIA ​​analyzes that hiding strategies will give riders an advantage of 0.2 seconds per round. This phenomenon is also in line with the prediction of Mercedes chief engineer Andrew Shovlin before the Italian race.

When Q3 was just over two minutes away, Hulkenberg had just left the first pit. But in Turn 1, he went straight through the corner of the zigzag and gave Carlos Sainz (McLaren) the lead. The remaining eight racers all followed to hide the wind. Nobody wants to pass the car first, even if the opponent slows down.

Drivers must hurry to their starting position before time runs out, but only Sainz can do it. That means eight riders could not improve or make a record in Q3, including Hamilton. The reigning world champion couldn’t cross Hulkenberg to get to the starting line in time. The organizers must investigate the behavior of the riders.

“Everything was chaotic at the end of Q3. But I’m still happy with the pole,” Leclerc said over the radio. This is the fourth time a Monaco driver has won a pole in his career. This is also the seventh race in a row Leclerc achieved better results than Vettel in the qualifying round.