You may have your kung-fu moments during your childhood with your friends and siblings. Fighting for the small things and allowing a kick to fly – you have been down the nostalgic trip before.

When you look at your life, there is specific kung-fu in you. Still, it takes far more than that for producing fantastic martial arts movies. The martial arts flicks work to combine excellent combat with the story, which makes it worth your downtime.

While there have been many martial arts, only a few have attained the cult status. In this post, let’s look at some of the top picks.

It is one of the most iconic martial arts related movies. Magnificent Bruce Lee’s sights, the gleaming eyes, ripped body, destroying the evil-doers – nothing is more compelling than them. The 1973 flick managed to shatter box office records, aside from gaining unrivaled popularity all over the world. You can feel this movie; it is an emotion getting to you and taking you on a trip.

More than only a movie, this fantastic one was successful in bringing martial arts as one of the genres on the map. 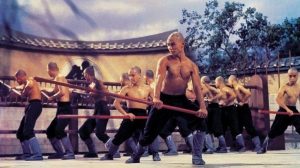 It is one of the most significant Kung Fu genre explosions from Lau Kar-Leung. People tend to consider it as the most terrific martial arts movie.

Though it is debatable, there may be no doubt regarding the direction’s standard as well as action in this fantastic movie. The 1978 release comes with a pretty daring narrative; about 60 minutes of the film are dedicated to training sequences while still not being dull.

This film is usually regarded as the best of its kind. Though it may not be favored compared to some other martial arts movies, it can certainly hold its own.