Nadal has won all six sets through his previous three confrontations with Delbonis. Reunited in Melbourne today, that winning circuit was extended by the Spanish player into nine unbeaten sets. However, Nadal’s record of winning no more than three games in each set was broken by Delbonis.

The world’s number one player takes two and a half hours to win the 63rd match at the Australian Open, 6-3, 7-6 (4), 6-1 against Argentina. In the first two sets, Delbonis fiercely resisted, but in the last set, he made many mistakes and could not put any more pressure on Nadal.

Nadal lost 19 points in serve games and didn’t face any break-points throughout the match. He won three games of the ball, one of which came from 18 chances in the first two sets. 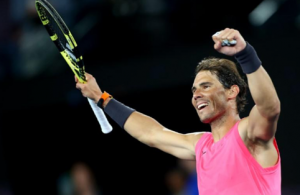 The number one seed missed up to six chances right in the second game at the beginning of the match and took nearly half an hour to be able to take the lead to 3-1. Delbonis saved two set-points to face in the eighth game, before Nadal closed the first set to take 50 minutes.

In the next set, nine chances were squandered by the Spanish player and let the opponent pull in the tie-break series. Despite leading 3-1, the champions of the 2009 tournament also had a hard time finishing the set of two dramatic dramas an hour and 11 minutes long.

In the final set, making good use of the mistakes of the 76th player in the world, Nadal won the last five games to continue on the journey towards the goal of winning the 20th Grand Slam.

Getting 33 winners and 29 self-defeating errors throughout the match, Nadal advanced into the third round, where he would meet compatriot Pablo Carreno Busta. No. 27 seed defeated Peter Gojowczyk 6-4, 6-1, 1-6, 6-4 to reunite Nadal, who won him four times in the past.