According to a press release from NBA, Vince Carter officially returned to the Atlanta Hawks after signing a one-year contract, a minimum value (veteran minimum) for the 2019-20 season. The veteran player who has worn eight different teams for over 21 years decided to write the end of his story in the NBA with a final season. 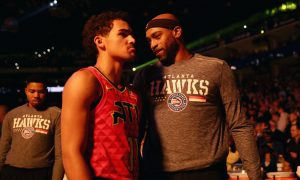 Entering the final chapter of his career, it seems Vince Carter will soon “hang shoes” without a championship ring. The former superstar, who has made eight All-Star appearances, often chooses the lower-tier teams instead of competing teams.
It is not difficult to understand when “Vinsanity” repeatedly frankly shared that he plays basketball because of the love for this subject, not because of fame or championship rings. Although old age, but Vince Carter is still a piece of experience that many top teams need. Nevertheless, the VC prioritized the guidance of the younger generation, laying the foundations for the potential Atlanta Hawks squad.
Occasionally, he went back in time with the basketball shot back full of surprises. But in most of the match for the Hawks, Vince Carter always created the model of one of the most professional players. He accepted to sit on the bench, always practice full manners that not many names in the NBA own.
Every time he came in, Vince played hard. Despite the difficulties of age, he still disputes and competes extremely enthusiastically in hopes of creating a model for youngsters of Atlanta.
Understanding the value of Vince Carter, the Atlanta Hawks left a place in the squad for this veteran player. Now, both sides have officially come to an agreement and legalized by a historic contract for “Vinsanity”.
This will help Carter stand in the line of legends like Dirk Nowitzki, Kevin Garnet, Kevin Willis and Robert Parish, the rare players who have played 22 seasons in the NBA. In addition, if the can go through on January 26, 2019, Vince Carter will become the first 43-year-old player since 2007 to play in the NBA.