Winning after 4 sets before the redoutable rival Rafael Nadal, Roger Federer had the 12th time in his career to play in the Wimbledon final. 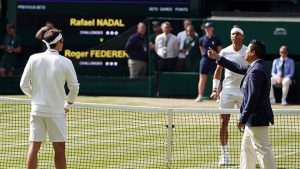 The last time Rafael Nadal and Roger Federer confronted in Wimbledon was in the final of 2008 with the victory of the Spaniard player. 11 years later, the ball-fan has seen the great battle between these two players in the semi-finals.

Both Federer and Nadal entered the match with a cautious move, especially in hand-to-hand games. Both of them did not make the slightest mistake to maintain their balance and were forced to decide to win by tie-break in the first set. Federer did better and won 7-6 ( 6-3).

Set 2, Nadal rose up, got early break and win 6-1 very quickly. Federer was back strongly in set 3. He got a break in the 4th game. From here, Federer played calmly to maintain his advantage and ended the match with a score of 6-3.

Entering the 4th set, Nadal continued to lose the break in the third game. The climax of tension took place in the 9th and 10th games when there were 5 match-points for Roger Federer. It took a fifth chance for the Swiss player to finish the match with the score of 6-4.

If defeat Novak Djokovic, Nadal will have the 9th victory in Wimbledon, in which the Swiss player is named a legend. On social networks, there are fans who have compared Federer to Cristiano Ronaldo. Both are one of the best at their sport, and the two still play very well despite not being at the age of highest form. The 37-year-old player has become the third oldest in the Open era to reach the final in the All England Club.