4 matches of the last group stage of Group A and B at the FIFA Women’s World Cup in 2019 took place, thereby identifying 4 names entering the second round without being out of the predictions of experts.

South Korea continued to have a third defeat and was officially eliminated after losing 1-2 to Norway. The Norwegian girls celebrated after the victory and entered the second round.

In Group A, Korea continued to have a third defeat and was officially eliminated after losing 1-2 to Norway. Two goals from Northern European girls were recorded from the 11th minute, thanks to Caroline Graham Hansen (5th minute) and Isabell Herlovsen (51 minutes). The honor goal of Korean girls was recorded by Yeo Minji in the 81st minute. 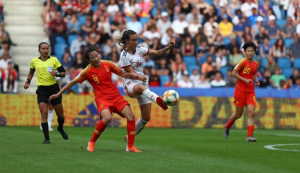 In the remaining match that took place at the same time, Nigeria also lost to France with a score of 0-1. The only goal of the match was scored by Wendie Renard from the 11th minute in the 79th minute. It was also a very hot match, when the referee had to draw up to 4 yellow cards and 1 red card for Nigeria, while France must also receive a yellow card.

Thus, after the first round matches, France ranked first with 9 points after 3 wins and the same difference 6. Norway ranked 2nd with 3 points with positive difference 3. Although it also got 3 points, but only with a negative score difference of 2, so Nigeria accepted with Korea to leave the game. The most regretful is Korea after 3 losing games, conceding 8 goals and only scoring 1 honor table before parting with the tournament.

Meanwhile in Group B, two matches on the morning of June 18 also ended when Germany had an overwhelming victory of 4 goals against South Africa. Four goals from Germany were scored by Melanie Leupolz, Sara Daebritz, Alexandra Popp and Lina Magull in the 14th, 29th, 40th and 58th minute. While the other match between China and Spain had a 0-0 draw.