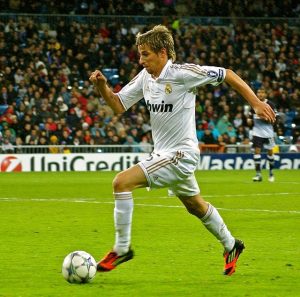 football season to end. After suffering humiliation at the hands of Barcelona towards the close of February, Los Blancos have begun the month of March in similarly unflattering fashion as they crashed out of the champions league in the last round.

Santiago Solari’s side received a shocking 4-1 spanking at the Bernabeu on Tuesday, 5th March 2019, to drop out of the competition on 3-5 aggregate, despite winning 2-1 in the first leg. The defeat extended a run they would love to forget, coming hot on the heels of two el Classico losses at the same ground.

Goals from Dusan Tadic, Hakim Ziyech, David Neres, and Lasse Schone, two in each half, brought to a grinding halt the hunt for a fourth consecutive European title for Madrid. They especially suffered at the back with veteran defender Sergio Ramos suspended.

Reports had emerged after the first leg that Sergio intentionally picked up a yellow card in Amsterdam so he could miss this match and be available for the quarters. Others claimed that Aja-Kasper Dolberg had deliberately invited Ramos to foul him so he would be suspended for the return leg. Dolberg said that veteran player Klaas-Jan Huntelaar had advised him to get into Ramo’s path and invite a foul.

Whatever the case, it turns out to be a significant loss for both Ramos and Madrid. The Spanish giants now have to drag out the season with no title on offer for them. A 3-0 humbling by Barcelona in the Del Rey return leg ended their run on that front, while a 1-0 loss to the same side a week later left them 12 points adrift of the top of the league.

Gareth Bale seems to be falling out with the club, and will probably be on his way home at the end of the season.