Surprise alert; tennis is the second most popular betting sport in the UK! Yes, after football, the other competition which UK residents are placing their money on is tennis. It may not be logical in a country where rugby competes for headlines with football and the only times that tennis is mentioned in the mainstream media is during the opens and the Grand Slam. 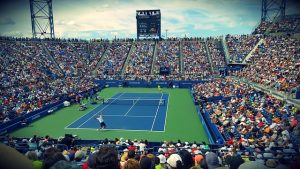 betting past sports such as rugby and horse racing. This is because online betting allows punters to exploit the simplicity of the game of tennis from the comfort of their handheld devices or PCs.

The speed at which the game moves makes it exciting. Punters can bet on each set or even a single serve in a live betting model. Thus, winners can collect their winnings instantly, and losers can fold and leave without spending too much time.

Contrary to popular belief, there are more tennis events than the publicised opens and Grand Slams. Every week, a host of players go up against each other In competitive matches across the UK. These include institutional, and federation organised tournaments. This is a great place to bet on raw talent.

The rise of virtual games has also increased the number of tennis events available to bet on. Virtual leagues speed up an already fast game and can be a fertile fishing ground for punters.

When it comes to big events, the predictability of tennis makes it attractive. Big names such as Serena Williams, Maria Sharapova, Novak Djokovic and Rafael Nadal among others, are always putting in performances which make them safe bets for punters.

The odds rise, and the events become more exciting when these icons come up against each other.