The Novak Djokovic won against Daniil Medvedev 6-1, 5-7, 6-4, helping Serbia to overcome Russia in the ATP Cup semi-final on January 11.

The drama of the match was poured into the final game. Djokovic took a 5-4 lead, delivered and led 30-0, but Medvedev won three points from three persistent balls to get the first break-point in the third set. That was the time when the Russian tennis player was better than his physical senior.

Medvedev was even more determined to receive the support of his teammates in Russia – who would be eliminated from the ATP Cup if Medvedev did not win the game. 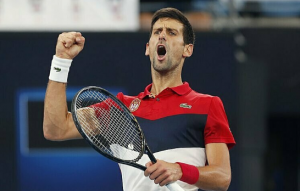 Right at the most difficult time, Djokovic showed his bravery when he successfully saved the break-point. But right at the next point, the Serbian tennis player, impatient, netted from a delicious situation and faced the risk of losing the game.

Under great pressure, “Nole” offered the ball as the highest peak in the match. Medvedev saved the ball persistently and had a chance to counterattack with a small drop on the net, Djokovic only responded with a high ball to the Russian opponent to catch a volley. But the incredible strength of the Serbian tennis player helped him counterattack in the surprise of Medvedev.

Medvedev did not give up after the opponent’s brilliant ball. He saved match-points by winning backhand points along the line, before owning another break-point. But the ability to serve a stable at the critical moment helps Djokovic overcome difficulties. The world’s number two player wins three points in a row to beat juniors 6-1, 5-7, 6-4 after two hours and 48 minutes of play.

Contrary to the anger shown in previous matches, Medvedev happily accepted the defeat. The world number five player made a spectacular comeback after losing 1-6 first sets. Youth and confidence helped Medvedev regain the game at the beginning of the second set and led the senior 4-1. Djokovic removed 4-4 but Medvedev coolly won the only set-point to win the set of two 7-5.

The match that looked like the best from the start of the tournament ended with a victory for Djokovic, when the Serbian tennis player was the only winner of the game in the last set. Djokovic, thanks to that, interrupted two matches and lost to his Russian junior.