The world’s number one player Novak Djokovic beat David Goffin 6-3, 6-4 in the semi-finals of the ATP 500 tournament in Tokyo, today 5/10.

After four games at the tournament, Djokovic has not lost a set yet. The win against David Goffin helped the Serbian tennis player reach the fifth finals of the year, and stood before the chance to win the Japan Open for the first time.

Like the match against Pouille in the quarterfinals, Djokovic made a perfect start against Goffin. The world’s number one player soon wins the game of holding the ball and maintains the lead until the end of the set. After missing two set-points in the eighth game, “Nole” won the all-match game to close the set with a score of 6-3.

The same scenario is repeated in set two. Goffin lost the first set game and couldn’t catch up to the opponent. The world’s No. 15 player has three break-points in the next game but can’t take advantage of it. Losing a game delivered in each set, Goffin put away the racket 3-6, 4-6 after 89 minutes. 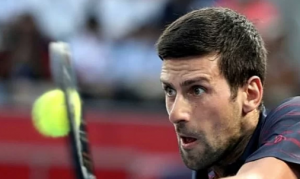 The match continued to witness the steady delivery of Djokovic. The owner of 16 Grand Slam serves the ball 66% and wins 87% of the first ball. In the final, Djokovic will meet John Millman – who defeated Reilly Opelka after two sets for the first time to the ATP 500 final. Djokovic won against Millman in the previous two confrontations.

The Goffin win helped Djokovic balance the 45 wins this season of Roger Federer. In terms of the number of victories in 2019, the duo is only inferior to Daniil Medvedev (54 wins).

Let’s see how will the result of  final be!