The Champions League champion brought 20 players to Qatar, including three goalkeepers, to compete in the Club World Championship.

The most noticeable name that Jurgen Klopp filled in the list of FIFA Club World Cup 2019 is Georginio Wijnaldum. The Dutch midfielder was hurt in the 2-0 win over Watford on 14 December, but was diagnosed not too serious and could return to play this week.

Meanwhile, midfielder Dejan Lovren stayed at home, due to a calf pain he suffered midweek in the Champions League win over Salzburg

Four young players, including Rhian Brewster, Harvey Elliott, Curtis Jones and Neco Williams, were initially brought into Western Asia by Klopp. But by the time the squad was finalized, only the last two names were on the official roster. Williams was a great player in the Arsenal 5-5 draw in the League Cup in late October. 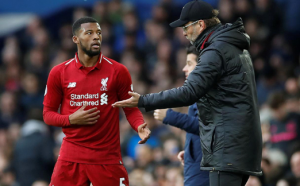 Liverpool’s first match at the Club World Cup took place on Wednesday, December 18, against Monterrey. Less than 24 hours earlier, Liverpool will meet Aston Villa in the quarterfinals of the League Cup. Young coach Neil Critchley will lead the U21 team Liverpool to this match.

“We are forced to cut some of the least influential matches,” Jurgen Klopp complained about having to split the two teams to attend two tournaments. “The main problem for Liverpool now is a shortage of players, not a schedule.”

After winning the Champions League in the 2018-2019 season, Liverpool must attend a total of seven tournaments this season. If you go to the final match in all seven tournaments, Klopp’s teachers and students may have to play 67 matches within 300 days.