After 94 years of expansion, from this year, Genesis Invitational was recognized as the official event of the PGA Tour with many new features.

With the original name “Los Angeles Open” with the first period in 1926, the tournament underwent many name changes due to the change of name sponsor. This year, the Genesis Invitational took place 58 times on the Riviera, par71, co-chaired by Tiger Woods and his TGR. Riviera was also the place to mark the first time “Super Tiger” appeared on the PGA Tour in 1992. At that time, he was only 16 years old.

The 2020 Genesis Invitational reward fund reached $ 9.3 million, up nearly $ 2 million from the previous year. Aside from the trophy and $ 1,675 million, this year’s champions will receive a special slot for the PGA Tour for three years, instead of two years as usual events. 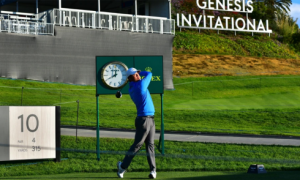 The competition roster has been reduced from 114 to 120, starting on the night of February 13 (in Hanoi time). Although less crowded than before, the prize promises many attractive when gathering nine stars in the top 10 of the world, including Tiger Woods. The owners of 15 major titles will team up with Justin Thomas and Steve Stricker through the first 36 holes on the way to find the 83th trophy at the PGA Tour.

If successful, Woods breaks the record 82 championship titles that he co-owns with the legendary Sam Snead. However, the Riviera battlefield has never witnessed Woods crowned from the beginning of his career until now. His best performance on this pitch was T2 at the Nissan Open 1999.

Some other groups with blood on the face include defending champion J.B. Holmes-Jon Rahm-Justin Rose, Patrick Cantlay-Dustin Johnson-Rory McIlroy, Brooks Koepka-Phil Mickelson-Bubba Watson. Last year, cutoff points were calculated at even par, and Holmes won the cup at -14.

Upgraded, the Genesis Invitational is on a par with other big name events like Jack Nicklaus at the Memorial Tournament and Arnold Palmer in the same name tournament. These are three of the five PGA Tour Invitational events, with the remaining two awards being RBC Heritage and Fort Worth.